A downloadable game for Windows

Your crew's spaceship is stranded, communications are down and you are under attack by alien zombies. The only way out of this mess is by working together!

Reconnect is a co-op space shooter focused on cooperation. Players are assigned simple tasks that leave them vulnerable to enemy attacks, so cooperation is key for progress; as a crew, you must protect eachother in order to succeed. Let your teammates know when you need help or when you can help them by using the message system, with four simple commands (help, hello, thanks, follow me) that are broadcast to the whole team. Reconnect is styled after 32-bit era games and uses a 4:3 aspect ratio, but you should still run it in 16:9 widescreen ;)

The intended way to play is by joining a random open game (or automatically generating a new one); if you want to make a custom game to play with friends, you can input the following cheat in the main menu to set a room code to share. The cheat is (using arrow keys and letters): Up Up Down Down Left Right Left Right B A

Reconnect is a short game that can be completed in a couple of minutes, and the ending is also linked to the Game Jam's theme (Reconnect) so I hope you are able to reach it! And if not, there's a cheat for that at the bottom of this page. I don't mind if you use it, I'd rather you see the ending than not :) but it does work better by actually finishing the game

All assets used are either available for royalty-free use, CC0 licensed, or previously bought by the developer (me) through the Unity Asset Store.

If for whatever reason you couldn't see the ending (bugs, difficulty, got bored, etc), you can skip directly to it by using the following cheat during a game session (using the arrow keys and letters): Left Down Right T 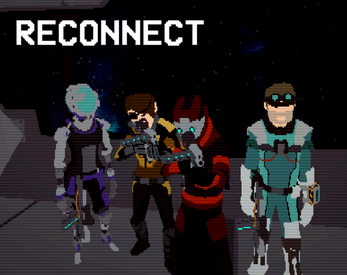